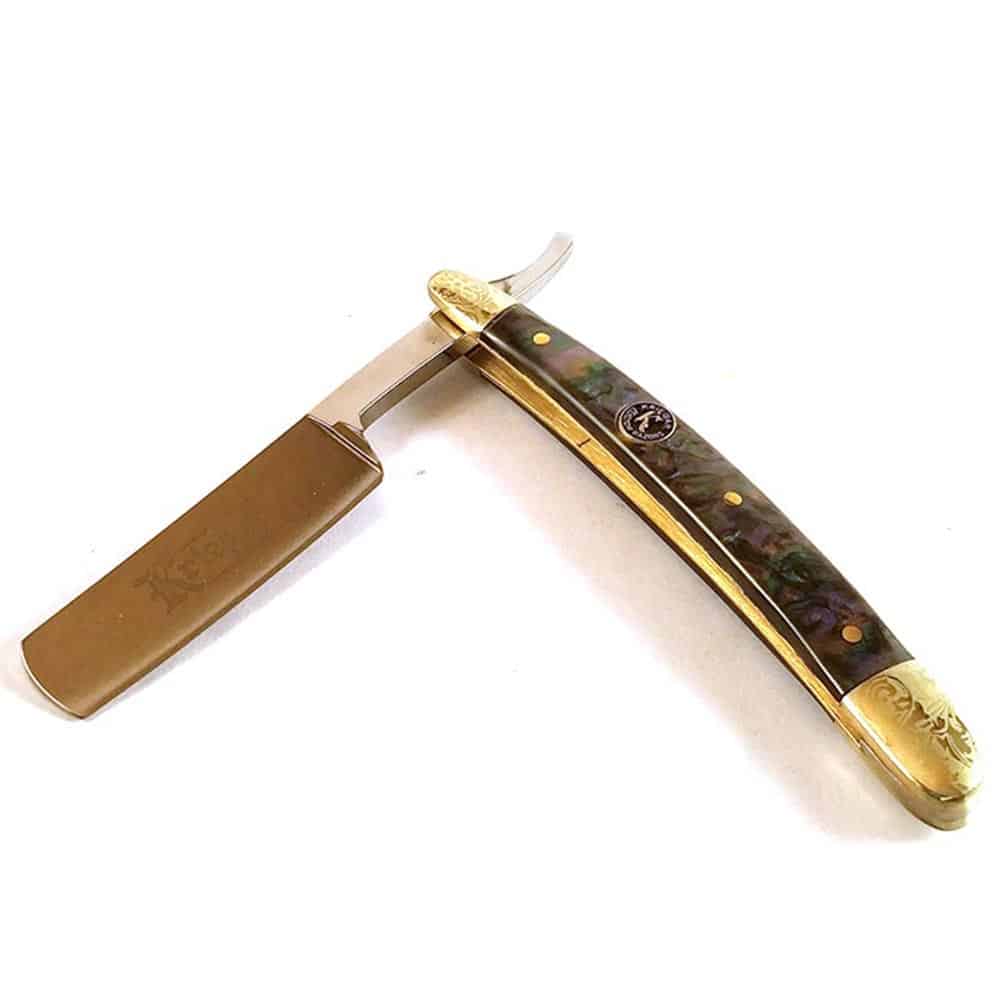 A beautiful box cutter; not a real razor

You would think that finding a decent straight razor would be a breeze in our modern interconnected world, but this couldn’t be further from the truth.

This is why we have written an article on Kriegar Straight Razor Review.

While there are still a number of well-respected companies out there that produce a variety of excellent straight razors (think DOVO or Böker), the problem is that the market has been flooded with cheap knockoffs.

Generally manufactured in Asia, these products may be super cheap, but they can’t shave worth a damn.

They may resemble a nice-looking straight razor, but they’re better served being used as a paperweight as that’s all they’re good for.

They may only cost you 20 bucks or so, but they’re still a huge waste of cash.

Here at Prim&Prep, we often stick to reviewing what we consider the best of the best, but today I thought I’d try a different tactic with my Kriegar straight razor review.

Widely considered to be one of the poorest straight razor imitations on the market, I figured I had to give them straight razors a shot to see if they really are as inferior as most Krieger straight razor reviews claim.

It is my hope that by taking you through my trying experience, you’ll be better able to understand just why it is so important to choose a high-quality straight razor such as the Dovo Straight Razor or Boker Straight Razor.

So without further ado, here is my review of Kriegar straight razors.

As I said, the decision to test Kriegar straight razors came after reading a great number of negative reviews on Amazon and other sites.

Many of the reviews appeared to come from straight razor newbies, so I thought I’d see how these razors perform for someone with 10+ years of wet shaving experience.

After ordering one online, I waited with trepidation until the day it would finally arrive and I’d have to subject myself to a potentially painful shave all for the sake of you, our faithful Prim&Prep visitors.

I was already hesitant when placing my order, as most Kriegar products on Amazon are listed as razor folding knives and many are sold under the category ‘Hunting Knives.’

So undeterred, I decided to push forward, and when my Kriegar Pakawood razor arrived, got out my hones to give it a good sharpening, which is where it all went horribly wrong.

My first impression upon reading numerous Kriegar straight razor reviews was that many of them were written by people who didn’t really understand straight razors and how they should be used.

For starters, many of the reviewers were complaining that the razor required some serious sharpening before it could be used.

Let’s set the record straight here—even the highest quality razors like DOVO that are sold as “shave ready” cannot live up to this billing.

Simply put, virtually any straight razor you buy will need at least a bit of honing or sharpening before it is sharp enough to provide a close shave.

That being said, the steel used to construct the razor needs to be of a high enough quality to hold a super sharp, fine edge.

Forgive me if I get a bit technical here, but it is necessary to understand the difference between a real straight razor and an imitation “razor folding knife” like Kriegar.

Although we’ve already covered the basics of sharpening a straight razor, it’s important to understand a bit about the honing process to see why this razor fails to make the grade.

When honing a straight razor, you generally want to start out with around a 1000x grit hone, before progressing on to at least an 8k or 9k hone to provide the finishing touches.

If you’re really serious about getting a sharp blade, you could go as far as 15-30k, but this is only possible with super high-quality steel, as inferior steel crumbles when you try to refine the edge this far.

Upon getting out my set of hones, I started off on the 1000x before moving on to a 4k, and at this point, everything was still as it should be.

However, I noticed issues as soon as I moved on to the 6k hone.

Examining the edge under a jeweler’s loupe (which is the easiest way to judge the quality of the edge), I saw that my fears were confirmed—the steel was simply too poor of quality to hold an edge past 4k.

Thinking that I may have simply been sent a defective razor, I quickly ordered another one, only to discover the same thing when it arrived.

Still, I wasn’t quite ready to give up yet, so I took both razors to a knife sharpener who has previously done miracle work on a number of vintage straight razors I’ve bought over the years.

After examining the steel and spending a few minutes trying to sharpen the razors, he also gave up and congratulated me on my purchase of two beautiful-looking box cutters.

Dejected, I went home and tossed both the knives (I can no longer call them razors with a good conscience) into a junk drawer, where they will likely remain until I clean it out, at which point I will most likely throw them away.

By now you may be wondering whether or not I actually ever tried to shave with them, and the answer is a resounding NO!

I’m no fool and I’m experienced enough to know that you should never attempt to shave with anything that hasn’t been honed on at least an 8k stone.

Since the Krieger razors could only be honed to half of this, I simply gave up, not wanting to torture my face, which is exactly what shaving with a Kriegar razor would be like.

The one good bit of news is that Kriegar straight razors are made of stainless steel, which means they won’t rust.

Although I haven’t actually used the razor for shaving, I thought about using one as a box cutter.

On second thought, I decided against it since the blade doesn’t lock in place like a real box cutter should (no straight razor does, but again, I can’t really call these knives razors).

While the stainless steel blade gives it a few extra points in durability, I’ve read enough reviews mentioning buttons falling out of the handle or the scales falling apart to give it a low score in this category as well.

Although I didn’t actually use it to shave, I can tell you that the weight and balance of it, is definitely off, meaning it wouldn’t be the easiest thing to shave with even if it was sharp.

It has a bit too much weight at the back and not enough on the blade end, resulting in a poor performance in this category as well.

And finally some good news…well, sort of.

The thing is, Kriegar straight razors are inexpensive, although perhaps cheap is a much more fitting word.

The majority of them cost somewhere between $10 and $25, which would be considered a great deal for a decent quality straight razor.

The problem is that these things shouldn’t be considered razors, as they will never truly be sharp enough to shave with.

Am I saying that you should go and get a luxury straight razor?

That said, you could actually get a very decent but slightly more expensive straight razor that will do a better job than what this ‘knife’ can offer.

That being said, there are somehow still enough positive reviews out there (I suspect from people who’ve never seen a real straight razor) to suggest that some people are happy with their purchase.

Therefore, this is the one category in my Kriegar straight razor review where it gets a passing grade.

There are far better products out there, but there may not be any worse ‘straight razors’ on the market.

The low price is really all Kriegar straight razor has going for it.

This ‘shaving knife’ (as this is the best way I can describe it) will definitely not make the list of best vintage straight razors any day.

Don’t let the German-sounding name fool you; this thing has nothing in common with real German brands like DOVO or Böker.

It’s neither large enough nor can it be sharpened enough to be considered a straight razor.

So do yourself a favor and spend the extra cash on something you can actually use for shaving.

After all, there is a reason most Kriegar products are listed under ‘Hunting Knives’ instead of the ‘Beauty’ or ‘Health & Personal Care’ categories like most real razors.